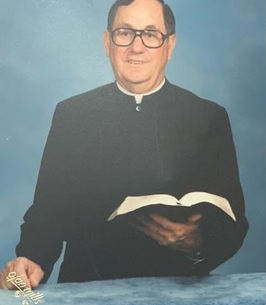 Charles Raymond Martin, born July 17, 1926 in Shimpstown, Montgomery Township, Franklin County, PA and graduated to his heavenly home April 3, 2022 at his residence in Chambersburg, PA.
Born to Amos Peter Martin and Anna Mary Shelley, Charles was the youngest of 8 sons.
Charles attended Montpelier School in Montgomery Township through the 8th Grade. He later completed his GED and ministry school for ordination.

Charles married Evelyn Good Hege Lehman of Chambersburg, PA on December 20, 1975. They were married 43 years until Evelyn passed on March 15, 2018.

Charles was a dairy farmer in his younger years until Hilda passed. He then worked for Peters Township for a few years before selling Surge dairy products.

At age 29, Charles was called to the free ministry in the Church of the Brethren and willingly served Back Creek Congregation and Brandts Church for over 66 years. His passion was for others to know the peace, joy and hope that comes from a life surrendered to Jesus.

Charles was preceded in death by his 7 brothers Paul Revere, Christian Daniel, Wilbur Lloyd, James Nelson, Russell Shelly, Edgar John, Jacob Earl, grandsons, Joel (Kristen Tyler) Martin and Michael Pittman.
A Celebration of Life will be held on Saturday April 9, 2022 at 10 am at Brandts Church in Saint Thomas, PA with a meal to follow.

Viewing and visitation will be Friday April 8, 2022 from 3 – 5 pm and 6-8 pm at Brandts Church. Burial will be at Saint Thomas Cemetery.

In lieu of flowers, the family requests Memorial Donations to his favorite charities: